PLDs are neat little programmable logic meant to replace the typical 74xx00 glue logic with a single IC. While largely replaced by FPGAs and largely abandoned by almost all silicon corporations, Atmel (now Microchip) still manufactures new ATF16V8 PLDs for use on all your legacy electronics projects the only catch is, the development software won’t work on modern operating systems.

WinCUPL is a relic, latest version copyrighted on 2003 (windows XP was on its early SP1 version) and the look and feel is a throwback to Windows 98 development environments. Installing it on XP is mostly OK, looks as if it was made for Win98/NT/2000 and on any more modern system will destroy your environment variables during install, if it decides to actually launch it will have severe graphical glitches (especially on the simulator) making it barely usable.

Making a *cough* barely legal *cough* Windows XP machine and install WinCUPL on it has been my go-to solution these years, but its legality is dubious at best so I decided to find a more legal way to use WinCUPL. ReactOS, a free software implementation of the NT kernel and windows runtime (think WineOS) came to the rescue.

While ReactOS itself is far from perfect and a glitchy overall, it manages to have a better compatibility with some very old pieces of code than Windows itself, an in the case of WinCUPL, it worked OK enough to compile the PLD files, although with some pretty severe graphics glitches. (But hey! is free! x) 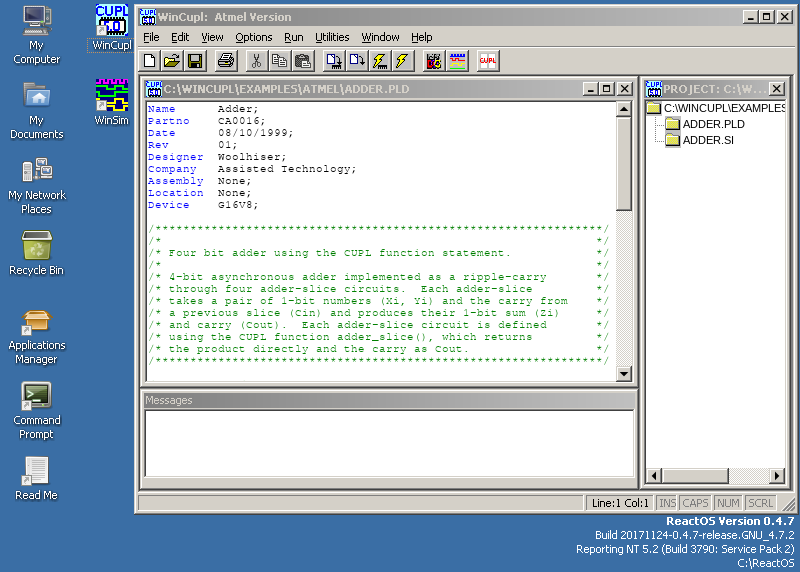