Don’t wanna read? Click here to try it out now!

Once upon a time I stumbled upon an article on Hackaday titled The worst CAD package ever is still handy where they describe and link to the Klunky schematic editor, an schematic editor for the Netscape era, where you click on a component symbol then place it on a grid. To save the schematic you take a screenshot of it. That’s it, really.

This simple, no bells or whistles approach for making a circuit diagram the quick and easy way, without installing anything, without logging in anywhere and without requiring a late 2010s computer to run is pretty neat, I loved it! So some time after I decided to give Klunky a nicer look while keeping it simple, small and ugly.

Dec. 2021: This is officially “The second worst CAD package ever” on Hackaday. Thanks for featuring my project tip :)

Kludge schematic editor is just a kludged-together (huh) in an afternoon project where I remade from scratch what Klunky is, but using a SVG for component parts, which looks way nicer than the original JPGs, and ditched the deprecated frames Klunky was using. Otherwise, the philosophy is the same, click on a component, place it on the grid. Use a screenshot tool or export SVG to save the resulting schematic. Here’s an example, an NMOS NOR gate: 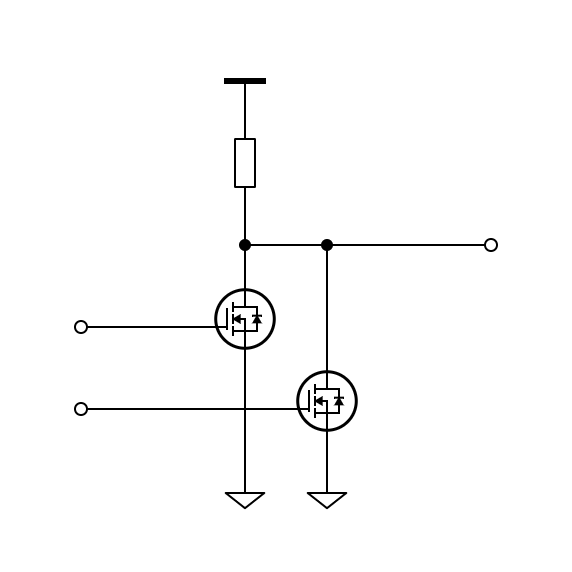 Also, exported SVG documents can be easily edited with Inkscape or any other vector graphics editor to have different stroke colours, for example to show the schematic on a dark background. This example shows both black and white stroke schematics on a 50% gray background. 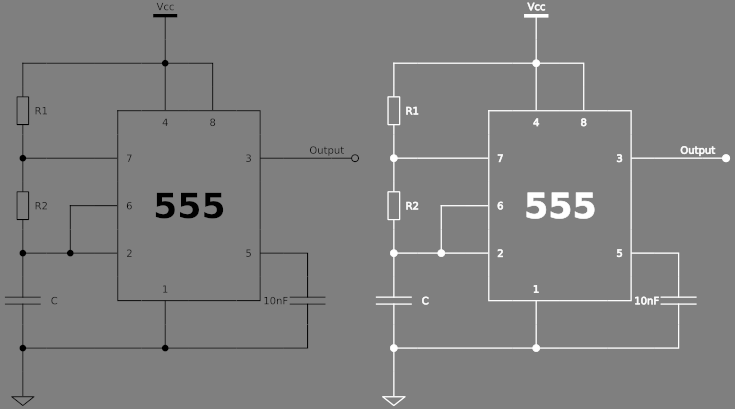 I promise that what comes below started as a serious attempt at describing the program, but one joke led to another and…

Kludge is a feature rich editor, you can:

Kludge parts library comes with everything you need to do some basic schematics, things like:

A few commonly used parts have keyboard shortcuts. By pressing any of the mapped keys, its corresponding part becomes the active part. If a part has multiple variants (like rotations) pressing the same key again will make it iterate over all variants.

Conductors, joints, and the blank “parts” are mapped into the numpad since it aligns neatly with all these elements. The numpad with each symbol looks like this: 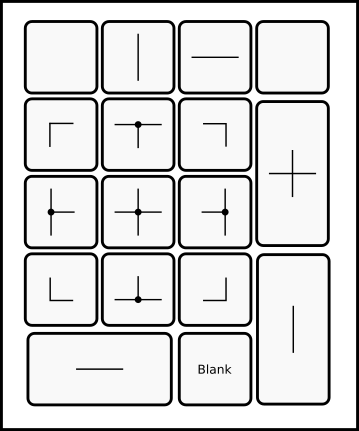 The parts selector menu may be placed on a new windows, there is a link on top of the page for it, so you may have all of the parts at hand, preventing any unnecessary scrolling back and forth between the grid and the parts selector. 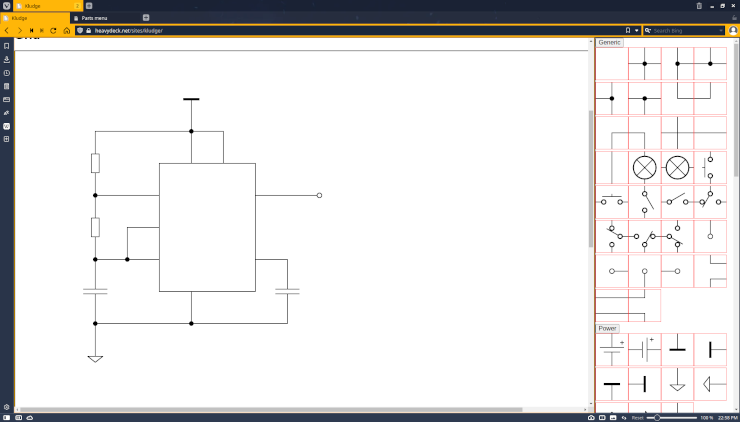 You might even have different levels of zoom on the parts menu and on the grid thanks to browser zoom!

The system requirements are slim:

Unlike the original Klunky, Netscape navigator is not supported and you must upgrade to a better browser like Internet Explorer.

Despite being a web browser based application, Kludge does not use any cloud services, gathers any usage data or in fact run any server-side code. It is just a CSS/JS/HTML application that runs entirely on your own computer. It doesn’t even use any fancy 1MB+ JS framework FFS!

Kludge is available online, as a zip file or at the source code repository.