Having found some i8085 CPUs not so recently I decided to make a proper microcomputer with them, providing it with common peripherals like RS-232 ports, and some not so common for the day peripherals like an LCD screen and a DMA controller. On this page I will be documenting the projects as it gets developed.

The i8085 is an 8bit CPU requiring a single supply 5V supply voltage, making it a popular choice for microcomputers and control systems on early 80s. It has a 16bit Address bus, giving up to 64K of directly addressable memory, and an 8bit IO address bus, giving up to 256 IO devices. The address bus is multiplexed with the data bus as to save pins on the DIP40 package, allowing for more interrupt options (5 interrupt lines) compared to other contemporary CPUs like the Z80 or the 6502 which usually have two but have un-multiplexed address bus.

At its most basic, the i8085 requires some memory and an 8bit latch to demultiplex the address bus. The standard 74HC575 (or any CMOS variant of the 74 series) works fine to do this job. Connecting the !OE and load signals to the relevant i8085 pins. 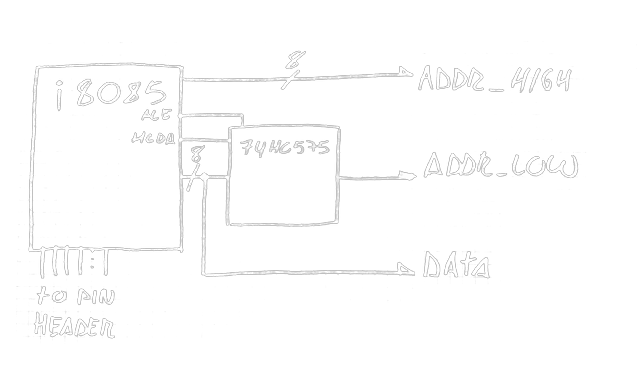 For the Micro85 memory layout I’ve decided to give it 64K of memory, either a 32/32 split of ROM/RAM or using the full 64K for RAM and having a way to bootstrap the program to RAM before bringing up the i8085 CPU from reset. The address decoder takes the IO/!M and the A15 address bit and with some glue logic (using a single 74HC00) select the correct 32K memory chip !CE line.

Update: While the memory layout remains the same, the 74HC00 decoding has been moved into a dedicated address decoder implemented with an ATF16V8 PLD.

Having some uncommitted IO pins is always useful. Implementing some GPIO is as easy as having some addressable latches where the CPU can latch in some values for output and assert the data bus to read some inputs. Having extra available 74HC575 from the CPU address made them the obvious choice.

Inputs are a transparent latch with load always asserted and the !OE signal connected to an address decoder, so when the CPU reads the correct IO address, the !OE line gets asserted and the inputs become available to the Data bus. 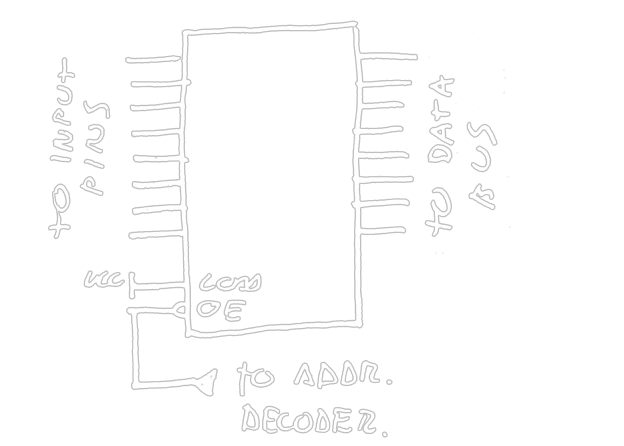 Conversely, outputs are a transparent latch with the !OE always asserted and the load signal connected to the address decoder so when the CPU writes to the appropriate address, the value on the Data bus gets latched into the output pins. 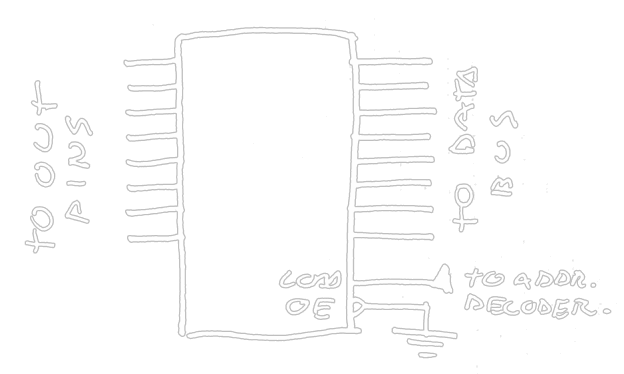 Since inputs are CMOS it would be a good idea to pull them to any value or connect them to the nearest output if not used.

For the remaining peripherals, namely two serial ports and some form of bulk storage, the easiest way to do it with reasonably priced hardware would be using a microcontroller to manage these “high speed” peripherals and use DMA and interrupts to move data to/from the CPU and peripherals.

Direct Memory Access DMA is essentially a way for peripherals to access the system main memory without involvement from the CPU. This frees the CPU from the work of moving the data to/from peripherals, increasing the efficiency of the system overall. A typical DMA transaction goes something like this:

On the i8085 the CPU has control over the buses during normal operation, so peripherals should not be able to take control of the main memory to read or write data from it. To make the CPU “give up” control of the buses, the i8085 provides the HOLD and HLDA pins. Asserting HOLD will tell the CPU to relinquish control of the buses as soon as possible. Once asserted, the data bus, the address buss and the !RD !WR IO/!M pins will go to high impedance mode, allowing for other circuit to assert those lines. Once the buses are free to be used, the i8085 asserts the HLDApin signaling other circuits that the bus is indeed free to be used by others.

Out of convenience and familiarity I’ve chosen a PIC18 (which probably has more computing power than the i8085) to do all the IO/Memory workload. It also comes with many useful peripherals out of the box like two UART ports and two SPI/i2c peripherals as well. This gives me an obvious solution as to how to give the i8085 access to both serial ports and storage (SD card or Flash via SPI/i2c) without having too many or too obsolete circuits.

A PIC18 microcontroller on a DIP40 package will have 36 GPIOs for you to use. Doing the math this circuit will have to control 16 bits for the address bus, 8 bits for the data bus, the IO/!M !RD !WR HOLD HLDA signals, 4 more pins for the two serial ports, 3 interrupt lines RST5 INT INTA, one incoming (CPU-to-DMA) interrupt line, 4 pins for an SPI peripheral (SD card) and a couple more lines I find interesting like !RESET or the PIC18 (!MCLR) own reset line.

Checking the i8085 you can notice the trick it uses to get some more IO pins while keeping the DIP40 package by multiplexing the data/address lines, so I decided to do the same in order to “save” 6 pins (-8 address bits + latch !OE and load) putting me on the 37 pin count, almost fitting on the pin budget I have. Multiplexing two other signals would put me just enough to fit all the IO I wanted on this circuit, so I decided to mux the address latch load signal with the SPI !SS signal since at no time would those two be used at the same time. Spurious load asserts don’t matter and spurious !SS asserts wont matter as long as the clock is kept quiet.

The same PIC18 also has two SPI/i2c controllers, the relevant CLK MOSI MISO and !SS lines will be exposed on a 6-pin header together with Vcc and GND so an external SPI flash or an SD card can be added to provide storage to the board. Just like the serial ports, it will be DMA-accessible to the i8085 CPU.

Time to get busy and make the microcomputer real. This is my first proper project where I will be using from start to finish as much free (as in freedom) software as I can. That means ditching some less than legal CAD programs and actually learn to use KiCAD for once.

KiCAD is a pretty powerful suite but the learning curve is a bit more steep than Labtec ARES/ISIS or Altium since the most likely answer for “Does it have this component?” is “No” so you will need to know early in the process how to make new components or half-ass your way and find a pin-compatible component. Common hacks are using whatever PIC18 you can find since they are mostly pin compatible, same goes for HC AC HCT variants of the old LS circuit series.

A brief description of some of the microcomputer building blocks will follow.

Like on the design above, the i8085 has a latch attached to it to store the lower address byte and the memory address decoder has been implemented on an ATF16V8 PLD where the IO/!M signal active value is dependant on whether the address line A15 is active or not. Additionally, all signals that need it have been pulled up or down to their inactive state, with the exception of READY and RESET which are pulled to their active state, meaning the board will start with the CPU held on reset and the memory will be accessed as fast as the CPU will try. 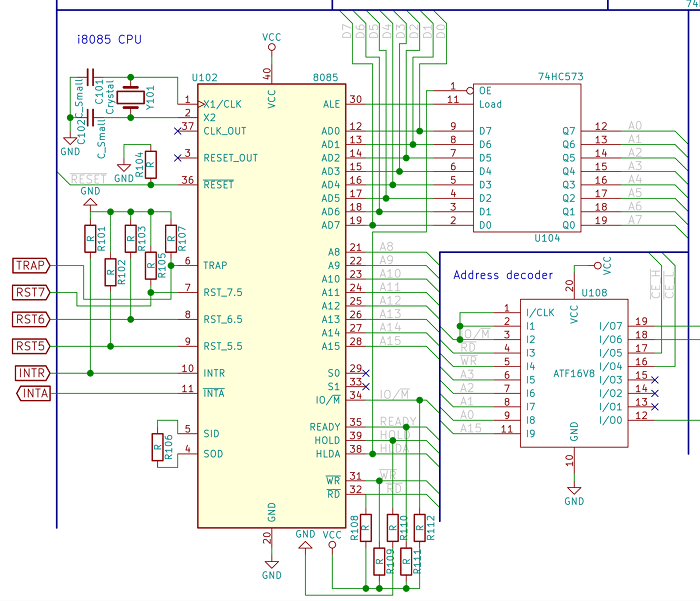 In a similar manner, the IO/DMA controller will be using the same ‘hack’ the i8085 uses to save pins by multiplexing one byte of the address bus only on this case the high byte is latched. Aside from the memory interface, the peripherals are directly attached to available pins on the PIC18, and the SPI !SS pin is multiplexed with address latch load signal.

A programming header has been placed in such a way that it should be usable with the whole system online, at most losing some of the serial port functionality. Additionally, a physical reset switch has been added to the PIC18 !MCLR pin in order to reset both the PIC18 and the i8085.

Note: Golden pins are connections to the i8085 CPU or the Address decoder. 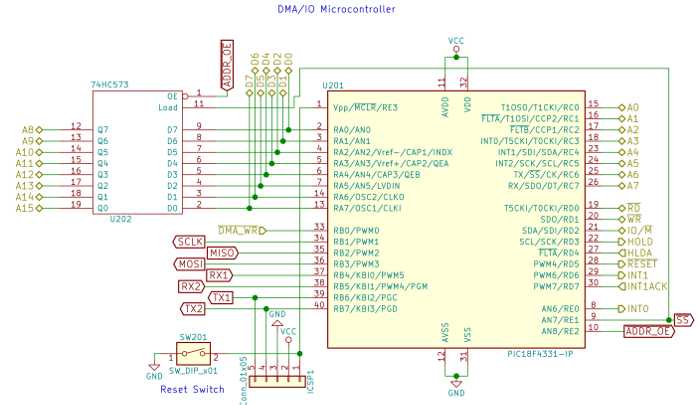 Boards have been ordered and the process of making this a reality starts now.

2018, April 10Th: Boards just arrived and I had to partially assemble at least one of them to test the serial interfaces and the address decoder with the PIC micro. Here’s a pretty pic of it. 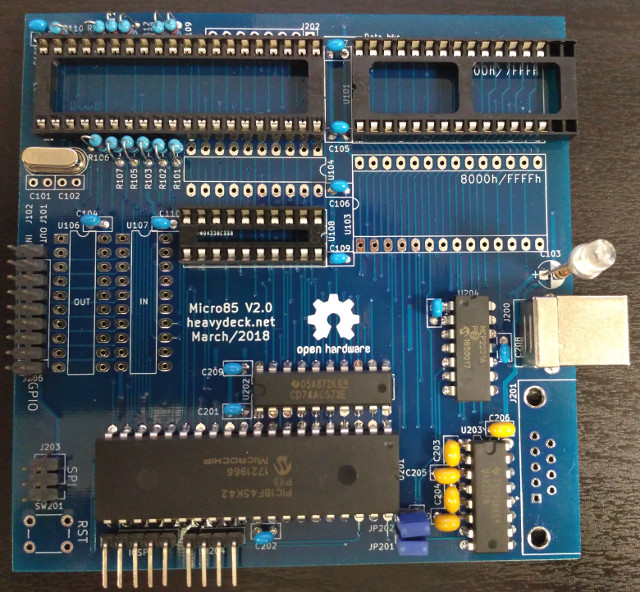 The USB interface seems to be working correctly as is the ICSP programming header. On the (literal) flip side, the internal pull-up of the MCU reset line is way too weak, to the point that putting a finger near that track can reset the MCU. As a result, I had to quickly add an unplanned pull-up. 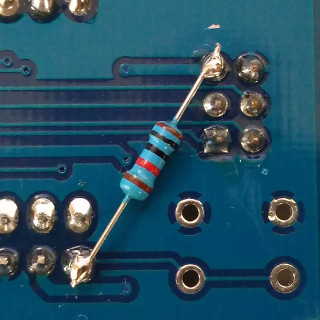 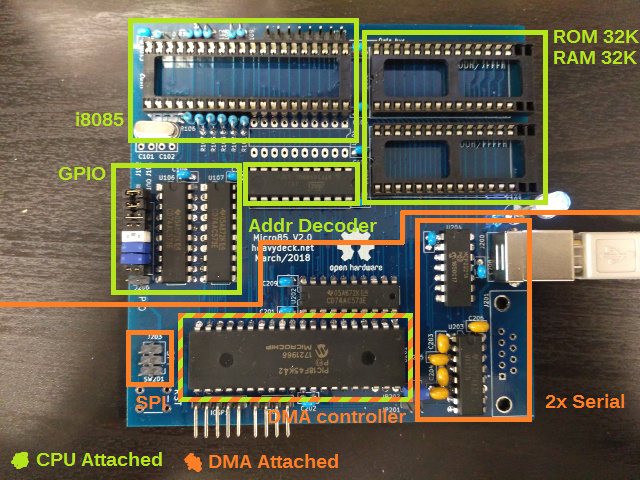 2018, April 17Th: Been developing the IODMA firmware. As of now it can make some Power up self tests (like detecting RAM/ROM and DMA address, and at last some writes to RAM were made via DMA.

This project is ongoing! Will update as development continues :)