A bit of a sequel to “Airplane WiFi, an underwhelming experience”. So I was on a high speed train and since the LTE connectivity using my phone as a hot spot was extremely unreliable, I decided to try the options available on the on-board wifi. 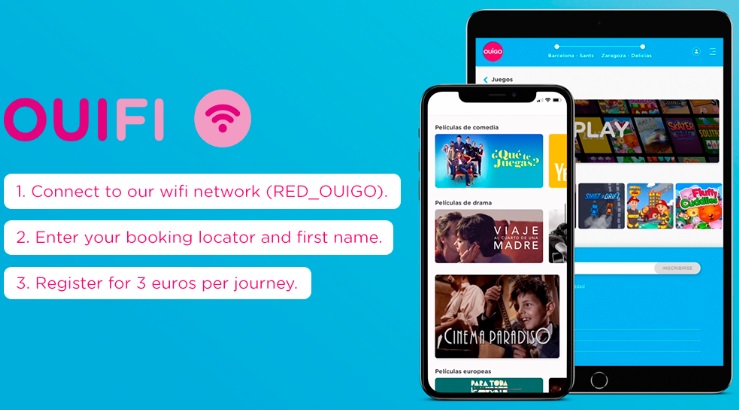 For our OUIFI service, the maximum browsing speed is 2Mbps and the download limit is 1 Gygabyte [sic] per trip […]

OK, fair enough, at least I might be able to watch some 360p content but yet again, like on the airplane, things were not great, but at the very least in this case the offer did not claim to be “high speed” or to be good enough for video unlike the airplane I wrote about last time.

Connection speed barely managed to hit the 2Mbps which at least this time I was warned about on the small print. The service worked OK for browsing news sites with frequent “connection lost” errors that required a refresh, but at least it seemed to work.

During the trip, the connection would randomly drop and stay unusable for minutes, and not only during places where that would be expected like tunnels or underground passages on cities.

VPN, yet again fixing what shouldn’t be broken

On one of My servers I have a VPN server with an HTTP proxy installed on it, for situations like these where Internet connection isn’t all that good or is heavily restricted. I’ve upgraded to using Wireguard instead of OpenVPN but otherwise is the same as last time on a plane.

Using the VPN improved the connection reliability, getting a lot less connection drops, which made the experience more usable.

No money? No problem! Again!!

This one was pretty fun. On another device, just connecting to the WiFi without entering any credentials or paying, the VPN managed to establish a connection, so for next time I will take the sub-par service, only for free when it happens.

2 out of 2 internet services on mass transport have sucked. Would not pay again.